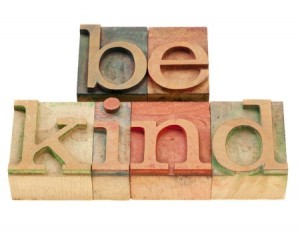 Last night while trying to pay off my new credit card I discovered an aspect of the fine print that wasn’t as beneficial as I had originally understood. Immediately I was furious at myself, at the credit card company that I’ve used for nearly 10 years and at the whole concept of coercion. This morning with just as hot of a head as last night I called the credit card and let it rip.

I was furious that I spent so much time shopping for that specific credit card and for those specific benefits. I pride myself on being a good shopper and I was embarrassed.

The customer service representative with his easy drawl let me fume at him. He didn’t interrupt and he waited until the whole story was out. Then he asked very straight-forward questions and amazingly enough solved the problem.

He didn’t break any rules, he didn’t change the conditions of the card, but he taught me about another option that helped me get the money back I had expected. It was like a balloon suddenly popped and all the anger leaked out of me.

Then he said that he needed to put me on hold for a moment but before he did that he wanted to hear about the weather in Massachusetts today. He actually said that.

Tell me about the weather in Massachusetts.

Ahhh, the power of language. I actually smiled. I don’t care if he went to a workshop on one liners to say to angry people. With that one line he reminded me that he was not only a fellow human and deserved to be treated well, but that he honestly wanted me to feel better about the greater world.

The beauty of language is how little is required to drastically change the moment. It takes a lot of guts to say something silly to diffuse a situation or say something loving in the middle of an argument. The right language of the moment is very often difficult to say. Today I am thankful for all brave people out there willing to say what needs saying.

As for the weather in Massachusetts, well, we are fully blessed today. It is gorgeous.