This is a guest post from a long time yoga student, Kristen Elechko. She shares inspiration from local spots in Northampton and her yoga practice and how she weaves that inspiration into competitive athletics. 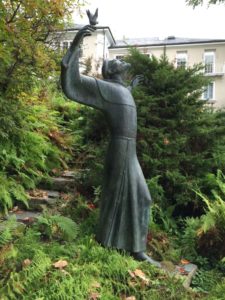 Inspiration can be found in the most common things. It can come from the place that you pass on any given day. Oftentimes, it is just tucked away, so perfectly, and in a way that makes it a gift to come upon. This gift for me, this inspiration, this beautiful and emotional anchor is a magical find on the Smith College campus. Tucked away in between the Japanese meditation hut and the President’s house stands the most magnificent statue of St. Francis of Assisi. The bronze being is life-sized and exhibits everything that I understand and still look to learn about surrender.

With arms outstretched, there is a power in his stance. You can see how his lungs are holding his arms, as if they would never fail. The centerline of energy is so clean and direct—it’s remarkable to see. Just when you feel like you have taken in all that St. Francis seems to hold, in terms of control of the body and spirit, one small element puts it all back into perspective again. A sweet little bird almost mimics St. Francis’ essence of surrender, perched delicately on his right hand. As if he wasn’t offering himself so intentionally to the world, his most brilliant match is with him. Softly. Gently. Carefully. Both are yielding in a way that can only come when the entire being is able to hold hope and comfort and to be completely integrated.

When I practice yoga, I think about this spectacular work of art. I try to weave in the intention, yield, integration and most of all, surrender. Arms wide open.

Yoga is not my “first sport.” It’s a practice that I have only come to over the past few years. I began with the initial idea that it would help me to stretch a problematic lower back and it has become so much more. Most recently, I was able to flow all that I have absorbed into a place and a space where I feel most practiced and comfortable: competitive athletics. In mid-August, I competed in the Gay Games in Cleveland and Akron, OH.

Surrender came in many forms for me. Cleveland was not the first place that I would have chosen for “vacation,” however, two years of training did have me excited for the main event—the triathlon. Swimming in Lake Erie just one week after Toledo’s water supply was too dangerous to drink had me rethinking my sanity. The irony also came from the fact that I race and raise money for Team Water.org, a nonprofit founded by Matt Damon that aims to establish clean water access and sanitation in places where it is most needed. When I arrived, the day before racing, Lake Erie had rip current warnings and the waves were big enough to wonder what I might do to stay afloat.

On the morning of the race, I brought myself to center with every bit of practice that yoga has taught me. I saluted the sun and found my solar plexus. I drew in my navel and found my centerline of energy, all with St. Francis in my posture. I called upon all of the determination that it had taken me to get to that point. I summoned every bit of focus and when it was my time, I entered the water with that same yield that had been modeled so many times, both in class and in the bronze being perched on the hill.

The trick with swimming is that you must trust the water. You must learn how to use your entire body in a way that is very counter-intuitive to most. Gliding through the water comes from reach. The more a person is able to use their crown to direct the centerline of energy, the more efficiently and effectively the body can move forward with speed. Imagine stretching long in a warrior position and how powerful and determined it can feel. This is the energy that supports swimming. And, once again, surrender. It is the balance of being both soft and strong that allows for the least amount of resistance.

My goal was to just make it through the swim. I’d been struggling with the water segment of my last few races. The problem: I was thinking too much. Exactly the opposite of trust and surrender.   When I was thinking, I was losing my breath, causing more struggle with my stroke and down-right feeling miserable–wondering what business I had racing any way.

But this day, this day was different. For exactly the reasons that I just described, only the opposite. I was calm. I kept my head down and I just focused on my form. I knew that I needed to be powerful in the water, yet that this power was not something to be demanded. It was more important to trust that the water would hold me.

There are so many moments that happen in between in our practice, in our daily lives, in the spaces that pull all aspects of life together. There were so many moments in between for me, in this race, however, it would take many more words and emotions to pour the entire experience out. Far too long for this piece. Save it to say, I exited the water feeling accomplished and focused. And, I zoomed off onto the bike.

One of the greatest gifts that Courtney has given to me is the understanding and sensation that my heart is multidimensional. It never occurred to me that my heart had a back side to it until about 9 months ago. How fascinating and how obvious. Or, not so clear at all. It has taken me, and will take me, years to understand how to use my physical heart in a way that is not just the monocular view I have previously held. There are days when I am in class when I can find the sensation, yet mostly only when coached. Have you ever felt the back of your heart? Have you ever felt it open and strong and offering something completely different than our common forward popping way of carrying the center of our chest?

That day that I was racing in Cleveland, during the exact most perfect moment and while riding on my bike, I felt the back of my heart open. It was the most exhilarating feeling. My entire being was integrated in a way that delivered more power than I even had a sense was possible. My lungs, similar to St. Francis, were supporting me. Both the front and the back of my chest were broad and open. And there was my heart. Full. This time, it was leading me from behind, in a very Nelson Mandela kind of way. And I completely surrendered even more than I did in the water. My heart is what made it all possible.

Kristen is a self-described lifelong athlete.  Yoga, running, and cycling are her most common activities now and are combined with a solid meditation practice.  Her mind, body, spirit connection is incredibly important and powerful—great care is taken in each of the areas to live a balanced and fulfilling life.  Kristen is an Associate for Imagine Philanthropy, a social justice philanthropy focused consulting firm that supports capacity building for women’s foundations and fund, as well as organizations that support women and girls, across the globe.