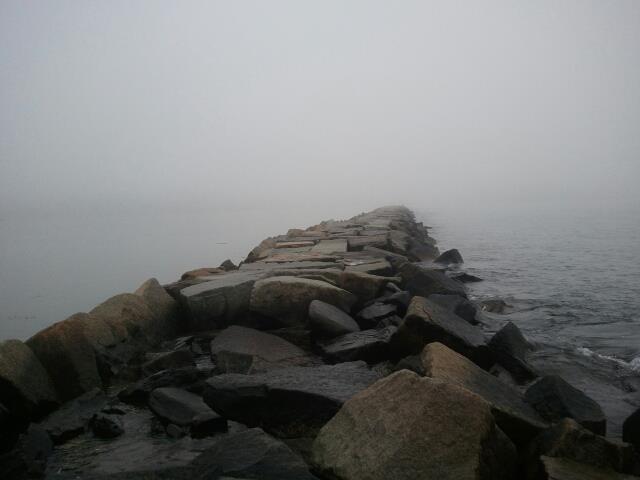 Yesterday I spent a gray day on a quiet beach in Rhode Island. I was there with a friend who moves at precisely my speed and the two of us enjoyed a very lazy, slow moving methodical day. We first walked along the beach in our street clothes and bare feet and made our way to a long breakwater by the edge of a little harbor inlet. It was a charming beach that everyone seemed to be avoiding on this 70 degree morning and so we stepped up onto the large stones of the breakwater and headed out to the tip.

I am a naturally cautious person. Raised by two worry-warts, I can easily envision the horrors that could happen with a slipped foot or a slide on a too sandy spot of a rock. With any other person I would have swallowed all of that caution and rushed quickly down the pathway, almost shunting the fear in my body. The faster my body moved the better the instincts, and I would reach the tip alive and safe and with my nervous system knotted like a noose at my throat. But yesterday I watched my friend come to the edge of a rock and carefully plan where next to place her foot. She wasn’t running on adrenaline, she was being mindful and careful.

So I let myself, in a very uncharacteristic fashion, be absolutely terrified. There were points I would stand two feet in an awkward stance, desperate for movement and completely uncertain how to proceed. Like my entire body had frozen and nothing could move. We have all had that sensation of full body terror that paralyzes us. Even if someone was willing to pay you a million dollars you couldn’t take another breath or raise an arm. And then we have all had the chemical reaction in the body when it clears and we can move again. It isn’t bravery, it is a complete body restructure. The adrenaline dies down and we contemplate on a rational level how to proceed. We can again brainstorm.

Giving myself this much permission started to feel like a meditation. I rarely took two to three steps in a row. Every single rock was the full arrival of confusion, then terror, then paralysis, then a quieting and finally an idea, which lead to movement. I could just sit back and feel it over and over again.

And it started to become a little delicious. When I mentally stepped back and viewed the whole circumstance I was so deeply proud of myself. So much of my life has been making the fear go away. This was letting the fear message important information to me and then prove itself inaccurate and release its grip. I was empowering the fear, which led it to be more rational, reasonable, responsible.

I have not written a blog post in a very long time. I thought it was about a year, but it wasn’t. The last time I wrote a blog post was December 2015. So I have been away a while. I still write blog posts in my mind. I still update my Facebook business page in my mind. We all have those little actions that we know we “should” be taking but some other part of our brain or life keeps us away from them.

I’ve explained it to some loved ones as the first rest of my life. Because it was. Maybe there is something about being free from one’s twenties and all of that pent up ambition and self-judgment. Maybe it was being free from my overly ambitious, insanely energetic, extroverted husband, who though I still love him to pieces, did entice me to do far more than my introverted, slow-moving self ever should have.

But when January rolled around and I was finally feeling sturdy again and ready for action, I had no idea what to do. My entire life was different now, but similar. There was no longer a partner there to pick up the pieces, to cover me financially if I had a bad month. There was no safety net and it terrified me. So even though it may have looked to the outside world like I was still resting. I wasn’t. I was paralyzed. Frozen stock still.

It felt like I was mentally slogging through quicksand. One step would sink me lower into a pit of my own shadows and shortcomings. But there was a richness to it. My healer instincts knew it was good, productive, healthy. From the outside there was no movement, no action. On the inside all of my demons and the strong parts of my character were fighting at full speed, clashing into each other, wrestling for their lives. There were horrible casualties to parts of myself that felt ancient, crucial. But they weren’t, and their passage created space and clarity.

Every day I was standing on the edge of a massive stone and to move into the next day I had to face the fears of being alone, not being able to pay the bills, not being a good enough teacher or healer, not being able to recover from the end of my love affair. But facing them meant letting them rise up in me until they nearly strangled me and then watching them grow tired of all that drama and dissipate. Then I took a small step. The next day it was all there again. But the amazing thing about life is even slow methodical steps eventually lead you out of the darkness and help you reach your desired destination. So after 20 months of not knowing how to sit down and write a blog post, I’m back behind the computer with things to say and the mental capacity to write them down. Thanks for your patience.

1 thought on “Paralysis: How Inaction Can Be Meditation”